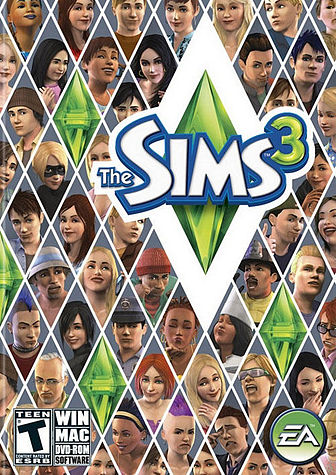 Play With Life.
"Just imagine, if you had lived your entire life inside the house. Then... someone opens the door."
—E3 2008 trailer
Advertisement:

The Sims 3 is the third standalone game in the The Sims series, released in 2009.

In contrast to The Sims and The Sims 2, the game placed more emphasis on the neighborhood by making it all accessible in real time and making all families age and evolve along with yours, but this could be turned off. It did away entirely with the Aspiration meter and removed Fears; instead, when you fulfill a Want, it just adds a positive "moodlet" (Status Buff) to your physical-needs total, thus streamlining gameplay immensely. Lifetime Aspiration Score is retained, but the prizes you get from it are mostly modifications to the Sim's capabilities instead of physical objects (Bottomless Bladder, The Casanova, etc).

The Point Build Personality was removed in favor of five "Traits" which had direct and practical effects on gameplay: for example, an Athletic Sim learns the Athletic skill faster and gets more enjoyment out of their workouts; a Clumsy Sim trips everywhere, which can add a lot to transit times; and an Evil Sim can gain enjoyment from messing with other Sims, or use a coffee machine to make Evil Lattes.

Relationships were simplified, with Sims sharing a relationship bar so both parties have the same opinion of each other, no longer allowing unrequited feelings. Finally, The Sims 3 added significant flexibility to the Sim and object design and customization options, though at the cost of very reduced support for user-generated, made-from-scratch objects, clothing and hairstyles.

Tropes in the game and its expansion packs: