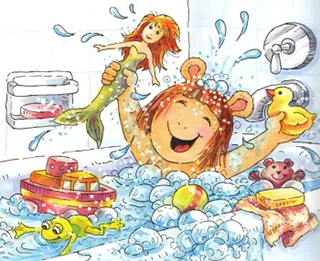 A work promotes the idea that taking a bath can be fun. This is usually in shows, books, or other works for very young children, though there's no law that says that it has to be. It may be because one of the characters on the show Hates Baths, or is simply a reluctant bather; in other cases, it may just be that they're trying to get in their daily Aesop. It can help if you can have a bit of singing.

This is a relatively new idea; there was a time when bathing was actually considered unsanitary or potentially dangerous for certain religious reasons. In all fairness, there was some truth to this.

It only really came about when it was more universally recognized as healthy and parents needed ways to encourage reluctant kids to take their daily or nightly bath.

If you were thinking something dirty about the meaning of this trope, forget it. This is about characters having fun getting clean. It doesn't have anything to do with anything dirty, other than any mud or grit that might be removed.

One of Sesame Street's most infamous songs, and it's about taking a bath.

One of Sesame Street's most infamous songs, and it's about taking a bath.