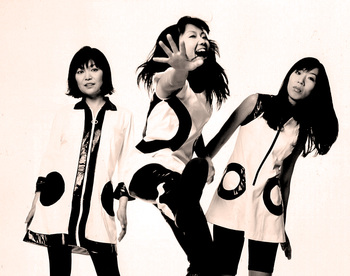 Shonen Knife is a Japanese Pop Punk group, that started in Osaka when two sisters and their close friend decided they liked The Ramones enough to start a band and copy them. They started gaining overseas recognition in the late Eighties and early Nineties when such notable figures as Kurt Cobain and John Peel brought them into the limelight, and since then they've had a respectable fanbase both in their native Japan and in the Western world.

Like their heroes, Shonen Knife's songs largely have simple chords, catchy lyrics and manic energy. They also have a rather large number of songs about food.

Tropes related to the band include: