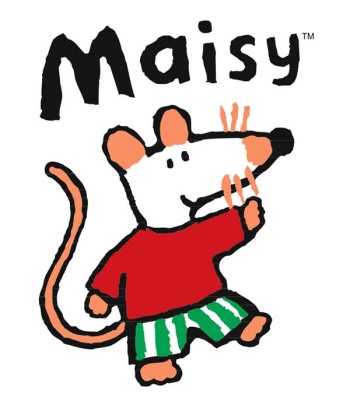 Maisy, Maisy Mouse!
Maisy is both a British series of books and an animated children's series by Lucy Cousins. They feature the adventures of an apparently young female mouse named Maisy and her animal friends, which include Eddie the elephant, Cyril the squirrel, Tallulah the chicken and Charley the alligator. Using her curiosity and imagination, Maisy is shown doing just about anything from taking her nightly bath to driving a train. Her adventures are presented in bright colors designed to appeal to the youngest audiences and all of the characters speak in a sort of childlike babble, their adventures described by a male narrator. The animated series (co-produced by PolyGram Filmed Entertainment, and after their absorption of PolyGram, Universal) aired on CITV in its country of origin. Though no longer airing, most, if not all of it was released on VHS and DVD. In some places, such as The Other Wiki, the series is referred to by its more formal title of Maisy Mouse, but officially, including in TV listings and on the video releases, it was referred as simply Maisy. Though the TV series has long ended, the book series is still issuing new releases as of 2019 and an official online Maisy Fun Club