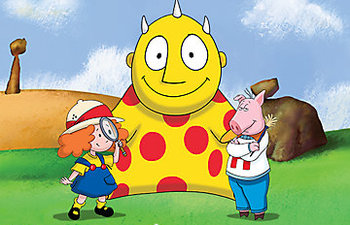 Maggie and the Ferocious Beast is a Canadian animated Preschool Show produced by Nelvana that aired on Teletoon. In the USA, it aired on Nick Jr. and Qubo. The series is an Animated Adaptation of a 1996 children's book by the mother-son writing duo Michael and Betty Paraskevas called The Ferocious Beast with the Polka-Dot Hide. Somewhat unusually for cartoons of this type, both Michael and Betty Paraskevas were heavily involved in the show's creation and production, as well as all subsequent book releases.

The show is about Maggie, a plucky and adventurous six-year-old girl who explores the strange and wonderful world of Nowhere Land. Her very best friend in all of Nowhere Land is the Ferocious Beast, an enormous but ultimately gentle polka-dotted creature who loves having fun. They're accompanied in their travels by Hamilton, a slightly neurotic but intelligent anthropomorphic pig who carries a cardboard box containing many strange and useful objects. Together, they have whimsical and wonderful adventures in the whimsical and wonderful Nowhere Land. Their adventures make for a laid-back Slice of Life Fantastic Comedy show for young children (and adults who enjoy silly kids cartoons).

The show began life as a series of shorts that started airing on Teletoon in 1998 as interstitials between longer shows, but was transformed into a full series in 2000. As is common with Canadian cartoons (but unusual for preschooler shows like it), it was not particularly long-lived, with only three 13-episodes seasons (for a total of 39 full episodes) and the original shorts. Nonetheles, it is fondly remembered by many who grew up with it for its sweetly surreal nature, not unlike something out of a child's dream. Reruns of the show later popped up on Treehouse TV and Qubo, but the whole series can legally be watched for free on YouTube through Nelvana's Treehouse Direct

In 2021, it was announced that a reboot of the series, called The Ferocious Beast Show, was in production, with Frederator Studios on board as a coproducer. The reboot is set for a 2022/2023 release.

Hamilton gets angry at Beast

Hamilton Hocks is angry at the Ferocious Beast because the latter made fun of his laughing.

Hamilton gets angry at Beast

Hamilton Hocks is angry at the Ferocious Beast because the latter made fun of his laughing.