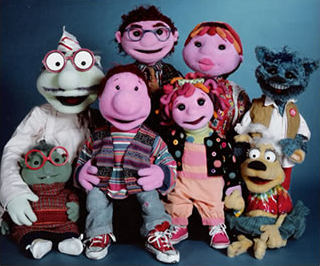 Allegra's Window is a preschool TV series that aired on Nick Jr. from October 24, 1994 to October 28, 1996. The show consists of Allegra going through her daily life as a little girl and learning important lessons along the way. Usually, those lessons would be through fun activities and music for children to enjoy. The mini segments during the episodes include a bird family who sings sometimes, and another one including the conversations between a tuba and a bass instrument. During the end of each episode, Allegra would reflect on all the lessons she has learned as she sits at her window.

Despite being successful, the show ended after three seasons due to Jumbo Pictures (the show's production company) being purchased by Disney in 1996.

Allegra's Window has the following tropes: