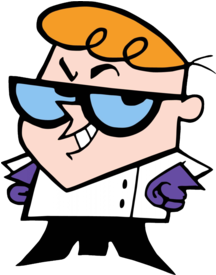 In many cartoons, characters that wear glasses seem to have their whole eyes fused into the lens. Their eyelids are nowhere to be seen, often all that is seen are pupils and the lens. Often the pupils go squinty when the character blinks, and the frames of the glasses have the ability to move around similar to an Expressive Mask.

Presumably, this is simply because drawing eyelids inside the glass frames is rather difficult and would create a less appealing character design.