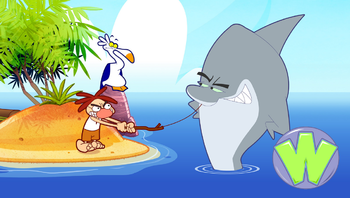 W. is a dialogue-free series of 30-second animated shorts that aired on Teletoon in 2006 as interstitials between longer shows. It was created by the Quebec City-based production studio 10th Avenue Productions

. 3 seasons were produced, comprising a total of 156 episodes.

The shorts follow a man named William, stranded on a small desert island and how he lives his life. In most shorts, he attempts to escape from his island with the help of a cormorant who acts as his only companion, usually to fail in some way (often as a result of a shark who also lives around the island).

If you're looking for Oliver Stone's biopic on George W. Bush, go here.