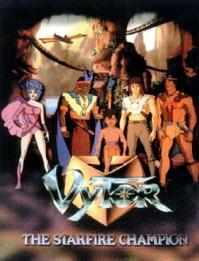 An animated miniseries by World Events Productions from 1989.

Young warrior Vytor and his friend Targill engage in a contest to see which of them will become their primitive village's champion. During the contest Vytor is attacked by a heavily armed robot who ultimately chases him into a secret room where a holographic woman tells him he's destined to become the Starfire Champion and stop warlord Myzor, "king of war". Myzor planned to use the awesome power of the Orb of Saturn to conquer the galaxy before its Starfire Ring was stolen by Vytor's father, and thus making a target of Vytor in order to get the ring back. Vytor is aided by Skyla, princess of a highly advanced civilization in, well, the sky. His primary weapon is the Starfire Shield which besides providing an impregnable defense can also act as a glider and houses the Trimerang, a giant mind-controlled shuriken.

Despite being a fairly promising adventure show, Vytor was shelved after only a few episodes were produced. It made use of somewhat extravagant animation and failed to find support from toy companies, and likely it would've been too hard to offset costs to keep making it. The finished episodes were originally aired as a one-week special event, later finding their way onto DVD.