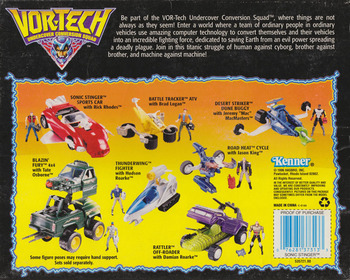 VOR-tech: Undercover Conversion Squad was an animated television series produced by Universal Cartoon Studios which aired as part of Claster Television's syndicated Power Block in the 90s, along with Beast Wars, reruns of Reboot, and G.I. Joe Extreme.

It featured a group of secret agents led by Hudson Roarke. Their mission is to Save the World from Lord Matrix, Hudson’s older brother, infecting the world with a techno-infectious plague.

Any similarities to the mid-80s toy line M.A.S.K. are not coincidental; see Recycled Premise for more details.