Luckily, My Shield Will Protect Me 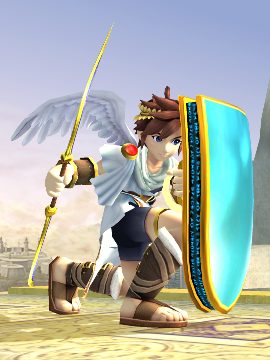 Zero Laser? What Zero Laser?
"Oak and iron, guard me well
Or else I'm dead and doomed to Hell"
— Andal Proverb, A Song of Ice and Fire
Advertisement:

Historically, shields are a staple of pre-gunpowder warfarenote And not unknown in the modern age, either., carried in a warrior's off-hand to guard his vital organs and help protect against arrows and melee weapons. Knights are known for carrying large kite shields with their heraldry brightly emblazoned on them, and the Phalanx of the Greeks and Romans uses walls of shields to protect soldiers. Most fictional characters seem to find a BFS or Dual Wielding to be cooler, deciding that Shields Are Useless, but there are more than a few who swear by a shield to guard themselves.

Shields come in all shapes and sizes and can be made out of anything from wood to Unobtainium to pure energy. Sometimes they're paired with a sword or other one-handed weapon, but oddly enough in fiction, they're often used on their own to mark the wielder as a Technical Pacifist, Improbable Weapon User, someone with a protective or reliable personality, or someone who just got screwed by the armoury. Despite being one of the most ubitiquously useful historical arms ever invented, major characters who use them are surprisingly rare.

Bashing someone with a shield is a historical use of shields, and in RPGs this usually serves to stun or knock a foe back. Throwing your shield is also another useful attack but its use in real life is less well documented.

Shields are also good for riding on. They can also have designs emblazoned on them, such as faces.

Not to be confused with Character Shield (not that kind) or Luckily, My Powers Will Protect Me (although one may shout "Luckily my shield will protect me!" to invoke the latter trope). Somewhat similar to Deployable Cover. It is the raison d'etre of the Shield-Bearing Mook.

Medieval shields frequently sported colorful coats of arms, and movie directors have duly taken full advantage of that fact to make their heroes' armor more spectacular. Less commonly seen in fiction has been the historical use of shields to carry people living or dead. Many ancient Germanic tribes inaugurated a new king by raising him on a shield. Spartan mothers proverbially warned their sons to either come back with their shields or on them, because dead men were carried on their shields.note Coming back with your shield proved you had faced battle bravely, because a fleeing man would always throw away his heavy shield. After all, if the shield was large and sturdy enough to carry a body on, you couldn't run very fast while carrying it.

This is, rather surprisingly, often an anachronism even when placed into Renaissance- or Reformation-era stories. Once plate armor became common in Europe, most forms of large shield were on the outs, since they were now redundant in protecting the legs. The small, center-gripped buckler is often derided in fantasy settings and tabletop settings as the bargain-bin shield, but it's actually the one that continued to be used into the 17th century. In fact, the buckler is where the Swashbuckler gets his name from even though you rarely see one use a buckler in the movies.

In video games, their effectiveness may be exaggerated to the point that Blocking Stops All Damage.