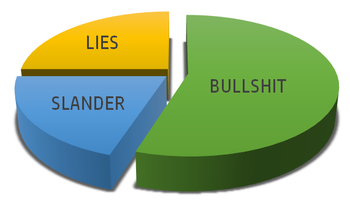 Not shown: Bunk, bupkis, malarky, cockamamie.
"Aw, people can come up with statistics to prove anything, Kent. 'Forfty' percent of all people know that!"
— Homer Simpson, The Simpsons ("Homer the Vigilante")
Advertisement:

This well-known saying is part of a phrase often attributed to Benjamin Disraeli and popularized in the U.S. by Mark Twain:

"There are three kinds of falsehoods: lies, damned lies, and statistics."

Numbers and formulas are supposed to represent "objective scientific data" you cannot deny which have been examined by intelligent and experienced experts. The Consummate Liar wants his forgeries to look undeniably "scientific", so why not use the magic of numbers that the not-so-math-literate masses could never deny? They say that statistics don't lie, and while that may be true, liars do use statistics.

This trope covers all instances of Artistic License – Statistics where someone manipulates statistics to present a misleading picture of the truth. The problem is, people do not pay attention to the context, just the numbers. For example, the statement "Brand X is 84% fat-free" sounds good until you realize that this means the food product is 16% fat by weight. Also, "fastest-growing" could mean that there used to be one customer and then there were five more, making a five-hundred percent increase. You should also notice Absolute Comparatives: it's fastest-growing, but specifically compared to when/what?

The whole business of throwing percentages at people in advertising, politics, and other forms of propaganda is almost destined for this kind of abuse. Relative measures are more likely to be understood accurately, and thus are less likely to be used in advertising.

The bogus uses of statistics are intended to imply a causal link between two elements when they are not linked, the link is questionable, or the link is opposite to what is implied. A beautiful example? "Coca-Cola causes drowning". By looking at statistics on drowning and Coca-Cola sales, you can see a link — more people go swimming on hot days, and more people buy Coke on hot days. Likewise, birth rates per head of population are higher in areas where there are more storks — because birth rates are always higher in rural areas, which is where one finds the Delivery Stork. Correlation does not equal causation; if it does, then we might also conclude that global warming is caused by a decline in pirate population and that 100% of Homo Sapiens who consume dihydrogen monoxide will cease vital functions and decompose.

Be aware of the Law of Very Large Numbers. Any fraction of a very large number is likely to be a large number, no matter how small the fraction is. It is estimated that 2,135,000 Americans have used cocaine (including crack) in the past month. But that's only 0.7% of the population! So, is this a lot of people, or not?

You should also be on the lookout for the related effect where things are made more remarkable than they really are. The odds that any given ticket will win a raffle may be very small, but it is certain that one will be a winner. You'd notice being dealt a royal flush in spades at poker, but the odds of it happening are exactly the same as those for being dealt any other hand of five specified cards.

Then you can get the kind of statistical abuse in which you are careful to define the question to get you the answer you want. What is the most popular book in the world? Depends if you mean most copies in existence (Quotations from Chairman Mao), most copies ever sold (The Bible) or fastest-selling ever (Harry Potter and the Deathly Hallows).

Statistics are like studies: who made them and who paid them matters a lot. Want to "prove" that video games cause violence? Get a group of scientists that are already savvy about this and don't mind the lack of ethics. Have them draw from a very small pool of test subjects that are known to display violent behavior. Mental hospitals, prisons, schools for children with behavior disorders, what have you. Do some generic tests that are guaranteed to show up positive, come up with numbers, and presto, instant headline. "Recent test shows 77% of subjects become more violent after playing Mortal Kombat." Most people won't bother with reading the article the whole way through and will just look at the headline. This works with anything from comic books and rock to watching Brokeback Mountain or voting for specific parties, basically anything. See Push Polling for a specific form of this.

Confirmation Bias, or the tendency for people to search out statistics that support their preconceived notions and ignore statistics that don't, is the reason for many of the entries on this list. The forgery mentioned above is also the reason most scientific and medical studies are done double-blind (meaning it's all anonymous, neither the researchers nor the participants know who's in the experimental group nor who's in the control group) and should allow for a chance at being falsified by Real Life (see also The Scientific Method). But you should beware of any advertisements touting a "double-blind" study, especially late-night ads because they tend to violate the truth-in-advertising laws.

In the end, statistics are not lies and statistics don't lie: people lie about the statistic itself or how it is interpreted. Some don't lie, they are simply ignorant, as are most members of the public in terms of statistical interpretation. See Logical Fallacies and Critical Research Failure.

"People use statistics the way a drunk uses a lamp post — for support, not illumination."

See also Nine out of Ten Doctors Agree, which is much a sub trope to this, and Absolute Comparative, where the use of statistics is avoided entirely by comparing the product to nothing.

When adding examples, please remember that this trope is not about amusing statistical fallacies, but about using statistics to misrepresent the truth.