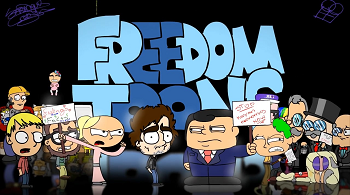 FreedomToons is an American animated political comedy web series on YouTube, created by Seamus Coughlin. It can be viewed here

Describing itself as "Educational Cartoons about Freedom and Liberty", it mainly satirizes and comments on current political issues and internet culture from an American right