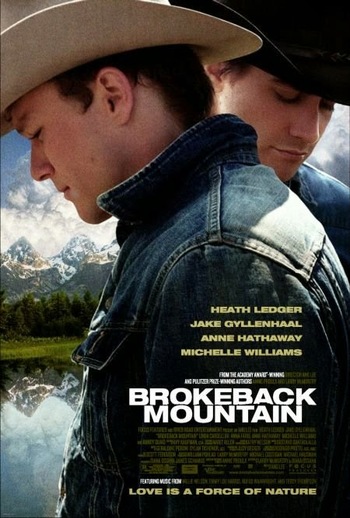 Brokeback Mountain originated as a 1997 short story by Annie Proulx but became a household name by way of a faithful 2005 film adaptation. Proulx praised the adaptation, declaring that "I may be the first writer in America to have a piece of writing make its way to the screen whole and entire".

In 1963 Wyoming, two young cowboys, Ennis del Mar and Jack Twist, take a summer job herding sheep on the slopes of the titular mountain. Over two months, the men (almost completely isolated from the rest of the world) first strike up a friendship, then a romance. However, they mutually see this as ending along with the job, especially as Ennis is engaged to Alma Beers back home. They go their separate ways; Ennis marries Alma and raises a family with her, and Jack finds his own wife and family with Lureen Newsome.

However, four years later Jack decides to contact Ennis and the two men re-establish ties, realizing that they both still love each other. Over the next sixteen years, they carry on an affair with each other by way of "fishing trips." No one is completely happy though — Ennis is unwilling to cut ties with his family and start a fresh life with Jack (in part out of guilt and confusion, in part out of awareness of what could happen to them if the world found out about their relationship), Alma knows what's going on from the moment the men are reunited and suffers in silence for years before divorcing Ennis, and Jack's own marriage becomes lifeless.

The film adaptation was directed by Ang Lee and starred Heath Ledger as Ennis and Jake Gyllenhaal as Jack. It got a lot of attention before it premiered simply for the premise; soon it was widely known as "the gay cowboy movie"note Even though they were shepherds, not cowboys. Between praise from many film critics and massive controversy thanks to Moral Guardians, the film became a box-office success, growing over 10 times its modest budget. It evoked some Hype Backlash and inspired many spoofs, but it also touched a lot of hearts. It went on to win Oscars for Best Director, Best Adapted Screenplay, and Best Original Score. To this day, it's still considered one of the most important films in the history of LGBTQ+ visibility and is considered by many to open the floodgate for queer entertainment to enter the mainstream. Was arguably remembered even more fondly following Heath Ledger's death.

And no, at no point do they eat pudding in this movie.

It became the first Best Picture nominee from the 21st century to be included in the National Film Registry by the Library of Congress.

This story and its film adaptation contain examples of: