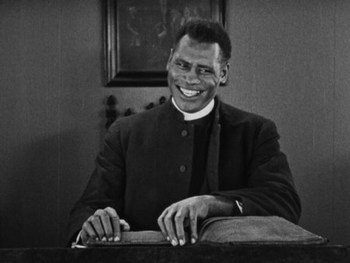 Body and Soul is a 1925 film directed by Oscar Micheaux.

An escaped convict (Paul Robeson—it's a silent film so unfortunately Robeson the magnificent Basso Profundo doesn't sing) has made his way to a small town in Georgia, where he is impersonating a Protestant minister. The "Reverend Isaiah Jenkins" is hardly reformed. He drinks during sermons, and when he's not drinking during sermons he's drinking at the local speakeasy, and when he's not drinking at the speakeasy he's shaking down the owner of the speakeasy for a payoff, threatening to condemn the speakeasy from the pulpit if the owner doesn't pay up.

The only one who sees through Isaiah is pretty young Isabelle, one of his parishioners. Unfortunately for her, her mother Martha, who has been completely hoodwinked by the good reverend, is determined that Isabella will marry the "godly man". Isabella prefers to marry handsome, nurturing Sylvester, who just happens to be Isaiah's twin brother (and of course is also played by Paul Robeson).

Film debut of Paul Robeson, who had already hit it big on the stage. Originally nine reels, but Micheaux had to cut it to five reels to get it past New York censors.