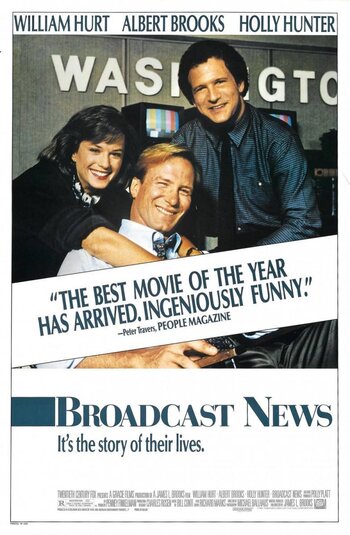 Tom: You're an amazing woman. What a feeling, having you inside my head.
Jane: Yeah, it was an unusual place to be.
Tom: It's, like, indescribable. You knew just when to feed me the next line the second before I needed it. There was a rhythm we got into. It was like great sex.
Advertisement:

A 1987 comedy-drama written, directed, and produced by James L. Brooks, Broadcast News tells the tale of three TV newspeople, working at the Washington, D.C. bureau of an unnamed network, who get tangled in a Love Triangle.

At one vertex, producer Jane Craig (Holly Hunter) leads her life in chronic emotional meltdown because of her obsessive-compulsive character. She's sexually attracted to but professionally repulsed by Tom Grunick (William Hurt), a simple reporter who landed his job solely on good looks and charisma. He only survives on live TV because Jane feeds him everything he needs to say through an earpiece. Meanwhile, the brilliant Aaron Altman (Albert Brooks) dreams of reporting evening news but his un-telegenic looks hold him back both from his ambitions and his crush on Jane.

All three share a slavish devotion to their work; even Tom, ever aware of his low intelligence, wishes to someday cover a story without Jane's help. As Roger Ebert describes: "After Hunter whispers into Hurt's earpiece to talk him through a crucial live report on a Middle East crisis, he kneels at her feet and says it was like sex, having her voice inside his head. He never gets that excited about sex. Neither does she." Indeed, it's only because their romance gets tied up in the workplace's questions of journalistic standards and integrity that Jane, Tom, and Aaron's Love Triangle gets tenser and tenser, as this character knot unravels while frequently shifting from comedy to drama.