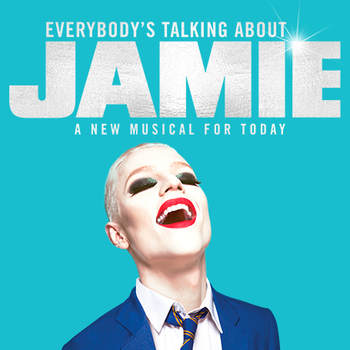 And you don't even know it!
"Out of the darkness
Into the spotlight
There is a new star
Shining so bright"
Advertisement:

Everybody's Talking About Jamie is a musical written by Tom McRae and composed by Dan Gillespie Sells. Inspired by the BBC Three documentary Jamie: Drag Queen at 16, it premiered in Sheffield in 2017, and transferred to the West End later that year.

The story follows Jamie New, a gay teenager growing up in Sheffield. Jamie desperately wants to become a drag queen, and, while his mother Margaret and his best friend Pritti, support him, he faces scorn and ridicule from his teacher Miss Hedge and the school bully Dean. As prom approaches, Jamie decides he will attend wearing a dress at Pritti's encouragement. In preparation, he befriends the owner of a local drag attire shop, who is all too happy to help him. However, it becomes apparent that the school is less than happy about his plans...

The show was nominated for five Laurence Olivier Awards. It is also noteworthy in certain circles for featuring Michelle Visage as a replacement Miss Hedge in late 2018.

Plans for a film adaptation, initially set to be released by 20th Century Studios, were announced in 2018; the theatrical release was canceled in early 2021 with the rights sold to Amazon Studios and new plans to debut globally on Prime Video; the film released in select theaters on 10 September 2021 and on Prime 17 September.

Everybody's talking about these tropes: