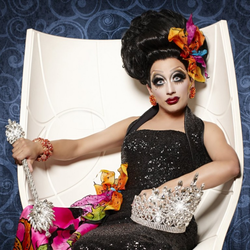 Not today TV Tropes. NOT TODAY.
Bianca Del Rio (born Roy Haylock; June 27th, 1975) is an American drag queen, comedian and actor. She has also worked as a costume maker and draper's assistant for various Broadway shows including Wicked.
Advertisement:

Bianca is probably best known for appearing on the sixth season of RuPaul's Drag Race as a contestant and, ultimately, winning the whole competition. One of the few queens to have never appeared in the bottom two, Bianca also has the distinction of never finishing poorly in any of the main challenges, winning three across the season.

An insult comic by trade, Bianca's quick wit and Brutal Honesty have made her one of the most recognizable and popular contestants in the show's herstory.

After competing, Bianca has launched several comedy tours and appeared in two comedy specials. She has also starred in a film that was in the works prior to her appearance on Drag Race.

Television, film and theatre credits (outside of Drag Race):