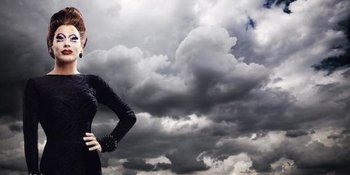 Prepare to get Schooled
Advertisement:

Hurricane Bianca is an American independent comedy and LGBT film, directed and written by Matt Kugelman and starring RuPaul's Drag Race alumnus Roy Haylock (Bianca Del Rio) as the titular Bianca. As well as being marketed as a comedy, the film touches on serious social issues, such as the fact that it was legal for somebody to be fired from their place of work for being gay, in 29 U.S states.

Haylock/Del Rio is Richard, a science teacher who takes a job at a school in a middle-of-nowhere Texas town, Milford. After being fired for being gay, instigated by villainous vice-principal 'don't call me Debbie' Deborah (Rachel Dratch), Richard returns as Miss Bianca Del Rio. To teach the kids about science, and teach the adults a lesson...