Film / Hunt for the Wilderpeople 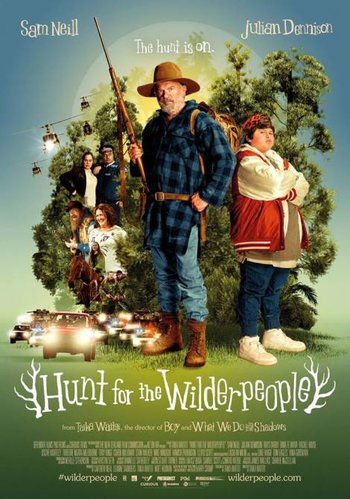 Hunt for the Wilderpeople is a 2016 New Zealand comedy-drama film directed by Taika Waititi and starring Sam Neill and Julian Dennison, based on the 1986 book Wild Pork and Watercress by Barry Crump.

Ricky, a fat, gangsta-obsessed Māori city kid who has been through a succession of foster placements, is sent to live on a remote farm with new foster parent "Aunty Bella" and her grouchy, withdrawn husband Hec. After a shaky start, he finds a home, until Bella dies suddenly and Ricky decides to hide out in the bush rather than be taken back into the indifferent embrace of Child Services. Hec goes to fetch him out, and a string of accidents and misunderstandings results in the two of them going on the run from a manhunt convinced that Hec has abducted Ricky.

"Me and this fat kid
We ate, we ran, and read books
And it was the best"- Uncle Hec