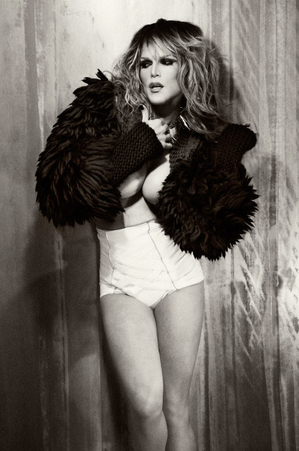 I'm trying to bring attention to one of my favorite causes, which is me.
Advertisement:

Known for her abrasive personality and vain persona, Willam is perhaps one of the most notorious contestants to ever appear on RuPaul's Drag Race, having been only one of two contestants (to date, the other being Sherry Pie) to be ejected from the competition, despite having been one of the favorites to win that season. Outside of drag, he's also known for his bit parts in film and television, most notably the recurring role of Cherry Peck on Nip/Tuck, and Emerald in the 2018 remake of A Star is Born, alongside fellow Drag Race alumnus Shangela.

Willam is also a recording artist, having released two studio albums and a bevy of singles throughout his career. From 2012 to 2014, he was a member of the pop group DWV, alongside drag queens Vicky Vox and Detox Icunt. Some of their most popular songs include "Chow Down" (a parody of Wilson Phillips' "Hold On"), and "Boy Is A Bottom" (a parody of Alicia Keys' "Girl on Fire"). Since their split, Willam has been performing regularly with fellow Drag Race alumni Courtney Act and Alaska Thunderfuck as The AAA Girls.

In 2018, Willam and Alaska began the Race Chaser podcast, recapping every season of Drag Race from the beginning. The success of Race Chaser led to the creation of Moguls of Media ("M.O.M.")

, an LGBTQ-focused podcast network in association with Forever Dog, which has launched several titles featuring other Drag Race alumni.