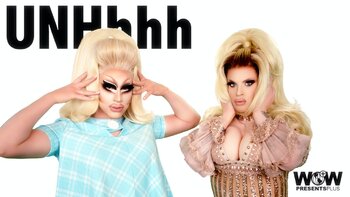 1-800-WE-COULD-HELP-YOU-BUT-WE-WONT
Katya: "You have been clamoring, clanging, and loudly banging pots and pans on the World Wide Web..."
Trixie Mattel: "For us to get together, and do a series!"
Advertisement:

UNHhhh is a web series hosted on the WOWPresents

YouTube channel, hosted by RuPaul's Drag Race Season 7 contestants Trixie Mattel (Brian Firkus) and Katya (Brian McCook), where they talk about whatever they want, because it's their show, and not ours.

Preceded by an episode of Fashion Photo Review —another popular WOW Presents series— guest-hosted by the twosome, the first official episode of UNHhhh premiered on March 25, 2016.

The format of the show involves the duo arbitrarily talking about a particular topic including, but not limited to: Drag Race, childhood & parenting, dating, religion, and holidays. UNHhhh is almost entirely unscripted, allowing Trixie and Katya to play off of each other while special effects and humorous editing are superimposed around them via green screen.

The (then-planned) final episode of UNHhhh dropped on November 13, 2017, leading into the premiere of a spiritual successor called The Trixie & Katya Show on cable network Viceland later that week. The new series, also produced by World of Wonder with the same cast and crew involved, featured a new segment-based format, as well as on-camera appearances by Trixie & Katya out of drag as themselves. Towards the end of the season, Katya began a personal hiatus from drag, and was replaced by Drag Race Season 8 winner Bob The Drag Queen for the remainder of its episodes.

Nearly a year after it officially ended, Trixie and Katya announced that a new season of UNHhhh was set to premiere on October 17, 2018. These new (uncensored) episodes premiered first on WOW Presents Plus, with censored versions later making their way to YouTube. When the COVID-19 Pandemic began, the two began a spinoff series titled Trixie and Katya Save the World filmed separately at their homes for 12 episodes until UNHhhh resumed in August 2020 with new social distancing protocols that separated them by 6 feet to have 2 cameras put them closer together in post until restrictions were lifted. As of December 22, 2021, UNHhhh has had 173 episodes across 6 seasons, with the 7th season set for 2022.

In addition to UNHhhh, they have a separate show on Netflix's YouTube channel titled I Like to Watch where they watch and react to Netflix original TV series, films, and exclusives including The Crown, AJ and the Queen, Chilling Adventures of Sabrina, Tiger King, The Babysitter: Killer Queen, and British reality competition Glow Up. Around a year later, with the COVID-19 Pandemic still in full swing, they began a podcast called The Bald and the Beautiful.