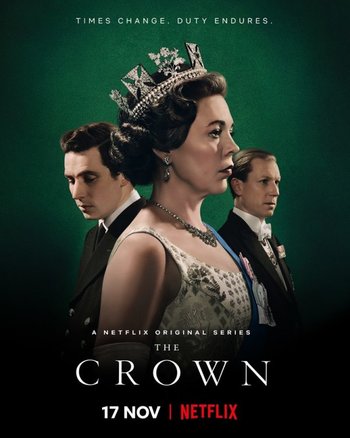 Times change. Duty endures.
"And while you mourn your father, you must also mourn someone else: Elizabeth Mountbatten. For she has now been replaced by another person, Elizabeth Regina. The two Elizabeths will frequently be in conflict with one another. The fact is, the Crown must win. Must always win."
— Queen Mary
Advertisement:

The Crown is an award-winning Netflix original series which premiered on 4 November 2016. It follows the life of Elizabeth II and that of her family, ministers, and governments, from her wedding in 1947 until her Golden Jubilee in 2003.

Series One and Two, starring Claire Foy and Matt Smith as the monarch and consort, cover 1947 to 1963 and track Elizabeth's growth from young princess to experienced queen. King George VI's untimely death from cancer in 1952 pushes Elizabeth onto the throne far sooner than she had expected, only a few years after she married against the advice of her family. Her burgeoning family life is thrown into disarray by the obligations of her position as she struggles to embody the authority and dignity of the Crown. This is complicated by her husband's dissatisfaction with his role and the public misbehaviour of other Windsors. On top of all this, she must learn how far she can and cannot go in her role as monarch, especially when it comes to dealing with elder statesmen like Winston Churchill and foreign leaders who underestimate the young queen.

Series Three and Four, starring Olivia Colman and Tobias Menzies as Queen Elizabeth and Prince Philip, cover 1964 to 1990 and follow a middle-aged Elizabeth reigning at a time of economic turmoil while dealing with continued family drama behind the scenes.

Season Five and Six will have Imelda Staunton and Jonathan Pryce take over as the head and consort of the royal house.

The series was created by and is written in large part by Peter Morgan, who has written a loose series of works about Elizabeth II's reign. The Queen is about the older Elizabeth (at the time of Princess Diana's death) and her relationship with her then-new Prime Minister, Tony Blair; The Audience is about her entire reign; The Deal, meanwhile, is about Blair's deal with Gordon Brown to get the Labour leadership ahead of the 1997 election.

The Crown contains examples of: