The Cycle of Empires 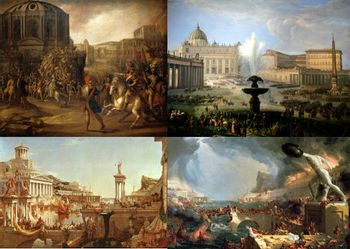 Expansion, Stabilization, Decay, Long Night.note  Battle Scene with a Roman Army Besieging a Large City by Juan De La Corte (first half of 17th century), French army in Saint Peter square in Rome (end of 18th century), The Course of Empire (The Consummation of Empire and Destruction) (1836) by Thomas Cole
"The empire, long divided, must unite; long united, must divide. Thus has it ever been."
— Romance of the Three Kingdoms
Advertisement:

In the morning, it awakes full of ambition, with a courageous heart and sharp teeth, so it can take everything it desires. At noon, it rests on its treasures, at the height of its strength and wisdom, still brave enough to defend what it has acquired. At sunset, its teeth are dull, it forgets its courage, and it squanders its hard-won riches for fleeting moments of pleasure. When night falls, it succumbs to sickness, writhing in agony as it rots alive. But if no predator or scavenger consumes it in the dark, at dawn it rises again, rejuvenated and strong. What creature is this?

Let's explain. The "Imperial Cycle" of history is a model that is put forth to try and explain the history of empires or other great states. It should be noted that this model is highly simplified and somewhat hidebound so that it can't fully fit every empire that has existed, but it is still an elegant and relatively accurate model, and highly influential in culture (especially Chinese and other culture in the Sinosphere). According to the theory, the History of every empire, real life or fictional, can be divided in four parts:

During this phase the Empire is still young and rising, many of its rulers are ambitious, and those with money often give them the loans they need to conquer their enemies. These days see the Empire established by military expansion, and also the most betrayals and civil wars, as many great leaders may turn against each other in their desire to take the throne for themselves. The Empire racks up massive debts from all this warfare, and its economy is likely totally devastated, but with its borders secure it'll probably be able to pay off its debts over the next few generations.

The ruler of this era is The Conqueror and Founder of the Kingdom. Serving him are The Good Chancellor or Evil Chancellor (depending on moral allegiance usually), fathers to their men, and just heroes of legend and lore. Opposing him are Feudal Overlords clinging to their old crumbling castles, warlords and barbarian chiefs, for whom Authority Equals Asskicking and Might Makes Right, opposing would-be empires and claimants to be met in climatic struggle, and hardline devotees of a previous empire, who want to preserve what little is left of it. This era ends when there is either nothing left to conquer worth conquering, or when everyone is just so indebted or exhausted that there is literally no money left to be loaned or taxed and The Empire can't afford to fight anymore. With long awaited peace the second phase begins.

In this phase the conquerors die off and are replaced by administrators who help establish a system of rules and institutions used to manage their empire, overseeing an era of economic & demographic recovery and growth and gradually paying off the still-massive debts of their ancestors. It may also involve a purge of hotheads who still think in terms of brute force, which is a significant source of internal conflict during this era. While not as aggressive as their precursors, rulers of this phase know war very well, having learned from conqueror's experience. Conquest may still occur, but the empire is more focused on protecting what they already have and use it to become stronger in cultural, administrational and economical sense, becoming a Hegemonic Empire.

The ruler of this era can be a Reasonable Authority Figure, though they can also be a Totalitarian Utilitarian control freak. Badass Bureaucrats, Honest Corporate Executives and, quite possibly, some Secret Police support them.

After the administrators' work is done, with debt down to manageable levels and no serious outside threats remaining, comes a time of economic growth and real prosperity. This may or may not involved a population high as well, which is a problem because agriculture can only support so many people in the long-term - meaning that many people will starve and die in times of famine until the population falls to sustainable levels again. The biggest problem facing The Empire is that more and more wealth and power is concentrated in private hands and not those of the state - the nobles and merchants become more and more strong and big, and the central government has more and more trouble getting local and regional governments to cooperate. The increasingly delicate balance of power is easily disrupted if just one Spoiled Brat inherits the throne and lets this weakening of the state happen. Even if there aren't any, the new generations of rulers take little pride from the administrators and think of their conquerors' heritage instead, often wasting state money on expensive military campaigns to expand the Empire just for the sake of conquest. They tend to spend their life on never-ending consumerism or hedonism, wasting what previous generations left for them instead of trying to secure or multiply it through 'boring' things like building infrastructure, re-organising the taxation system, or establishing new trade missions.

The ruler of this era can be The Caligula, a Royal Brat, an Adipose Rex, or a possible well-meaning but inept ruler, Unfit for Greatness, who will only make things worse with their reforms; helping (or hindering) him are a cabal of obstructive and corrupt bureaucrats and the whole Decadent Court, some of whom are on the payroll of a Corrupt Corporate Executive or two. Such an empire can already be called vestigial; it may not yet suffer loss of territories, but its influence is waning. The fate of Empire that enters this phase is to fall; the point of no return is already past, and no matter how gilded is the empire's facade, its structure is rotting, and the only way to stop it is a top-down revolution, that is, to tear everything down and rebuild from scratch (think Meiji or Peter the Great).

The Empire exists in name only at this stage. It is now a failed state, a gray zone of squabbling independent shards or sub-factions. The dissipation of The Empire's power to rich and strong and big individuals (oligarchs) is complete, with many families and even regions now only paying lip-service to The Empire and its supposed rulers. The Empire's fiscal situation is a mess because very little money will be coming in thanks to disloyalty and corruption, even though the state's debts haven't gone away - the debt might even be growing. This will be the case regardless of whether The Empire itself is still experiencing economic growth or not, but it's very likely that The Empire is also experiencing economic contraction due to the increasing concentration of wealth in the hands of fewer and fewer people.note Consumption drives economic activity, and the concentration of wealth reduces consumption because the wealthy have 'spare' money (that they don't use to consume things) and the poor can't afford to consume as many things. Wealthy people can only buy so much stuff - they tend to invest their money into making even more money (chiefly by buying land). The same amount of money (used by the rich to make more money) in the hands of the destitute, on the other hand, would be spent on 'real' things like food+shelter+clothing that other people make money by producing and selling. Long-term population decline is also likely, mostly due to the unsustainability of the previous population high - i.e. some people will starve because the total population's food requirements exceed total sustainable food production - but also due to banditry, civil disorder, and even Civil War.

Only a small part of the former empire's territories, half or less, give money to or actually take orders from the former capital; this is called a rump state, or a late, actually Vestigial Empire, where utter ignoramuses try to simulate the old Empire in a Cargo Cult-ish fashion, dressing in the robes of long-dead emperors and spouting bombastic orders no one actually listens to. The decadence of the old Empire is now concentrated around a few select oligarchs and their surroundings, possibly a rich city or two, and the rest of the populace is struggling hard to get something to eat. The majestic and titanic monuments of the previous imperial eras turn into ruins or are resettled by bandit gangs, marauders or folks more sinister still.

The ruler of this era is Authority in Name Only with a 0% Approval Rating, a Small Name, Big Ego pompous gasbag of a dictator or an outright Empty Shell who has lost all will and cognition due to Despair Event Horizon, a Fisher Kingdom effect or just plain senility and/or alcoholism, practicing Head-in-the-Sand Management. A Vast Bureaucracy may form, stifling any and every positive idea and pilfering away budgets. The peripheries, which the rump state no longer controls, are home to Feudal Overlords clinging to their old crumbling castles, warlords and barbarian chiefs, for whom Authority Equals Asskicking and Might Makes Right, and yet more Small Name, Big Ego dictators, who are pleasantly surprised that they don't have to kowtow to anyone any longer. However, in one or more sub-factions, intelligent leaders may arise and plan a new Empire; a new Expansion begins when one of them emerges openly, unambiguously triumphant.

Adjacent empires can see the rotting carcass of the empire ripe for plundering; they may directly intervene, send troops and partition the dead empire into colonial or semi-colonial pieces, or they can use hegemonism and make the petty states of the ex-empire their puppets.

Eventually, the Long Night ends with either total disappearance of the empire, its shards growing from petty and self-proclaimed to true distinct nations, or fading culturally and becoming just governorates of neighboring nations, or a climactic Civil War in which it is reforged in fire and steel and re-enters Phase One.

In fiction, the borders between phases are mostly clear, but in Real Life it wasn't always so clear - neither Caligula nor Nero brought the Decay stage upon the Roman Empire, because when the empire is mighty, the occasional tyrant doesn't hurt it much. It wasn't also uncommon to have rulers more fit for the second phase to appear in the first or third, trying to stabilize the situation. They can even pop up in the fourth phase, bringing the rump state back from failed to just decayed. However, it's usually impossible to restore the former regime to its full glory without serious reforms;note Ancient Egypt and China appear to be partially exempt from this rule even if such a restoration happens it usually either comes back wrong (and is already in the decay phase), or is too fundamentally different to be considered the same Empire (such as being brought back to the expansion or stabilization phase but speaking a different language, functioning with a different form of government and a different economic model, practicing a different religion with different morals, and sometimes ruling completely different territories). To truly restart the cycle, new ideas and institutions are required.

Some also applied this model to actors other than states such as religions or corporations.