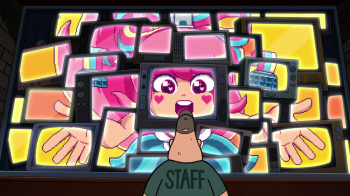 This kind of Computer Virus is literally The Virus - it's sentient, malevolent, and e-mailing itself into your inbox to possess your PC and Take Over the World. Don't think your antivirus program will get rid of it - it'll just Body Surf into your iPod, or the Magic Floppy Disk in your desk drawer (using WiFi, of course).

This stretches disbelief a tad, and not just because of hardware and software limitations. But still.

Copies of an AI will often be networked into a Hive Mind. In case the AI creates itself an avatar, it may look like Monstrous Germs - since that is how people picture "viruses".

See Clone by Conversion and Grand Theft Me for versions that may apply to organic beings.