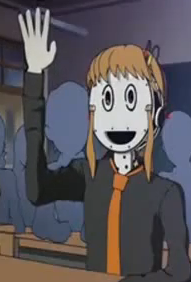 "Bender is some sort of wonderful mechanical man!"
— Futurama
Advertisement:

An index on robots and their tropes.

Because only the cold precision of mechanical beings computes, also includes Artificial Intelligence (and related tropes), Mechanical Lifeforms, and Cyborgs (which are reaching out to Machinity from the Meatside).

Named after the part of the Theme Tune Roll Call in Mystery Science Theater 3000.