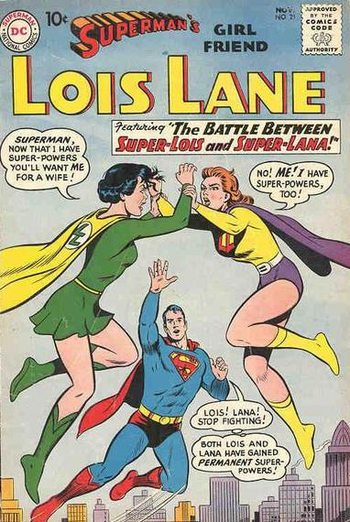 And they kept listening..."
— Superdickery
Advertisement:

Being a Side Kick, Love Interest, or even just general acquaintance to a Superhero sucks. There are kidnappings, high mortality rates, marriage threats, Superdickery and the ever present Sidekick Glass Ceiling to contend with.

If a setting isn't insecure about changing its status quo, or wants to change the dynamic from solo hero, to duo, or even Power Trio and beyond, then the Muggle supporting cast may catch Contagious Powers and these side characters will permanently gain powers, going up to Super Weight class.

This is typically done when the series gets a little older and writers are tired of one of the characters always playing the Distressed Damsel in Hostage for MacGuffin situations. The solution to stale plots like those is to simply give the cast members in question their own fighting powers so as to bring them in line with the rest of the cast, sidestepping questions about how "mundanes" are useless.

The opposite of the Sidekick Glass Ceiling and subversion of Never Be a Hero. Supertrope of Superhuman Transfusion and Sexually Transmitted Superpowers.

Delsin's conduit gene activates when he copies Hank's smoke powers and thinks that Hank somehow turned him into a conduit.

Delsin's conduit gene activates when he copies Hank's smoke powers and thinks that Hank somehow turned him into a conduit.