Words Can Break My Bones 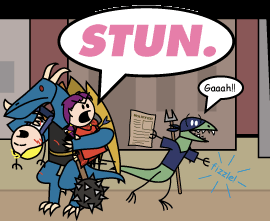 So potent, it takes up 8 pages in a spellbook!
"My name is a killing word."
— Paul Atreides, Dune
Advertisement:

Another magic trope that is Older Than Dirt, the idea of words that hold magic power unto themselves has been around since Ancient Egypt. Often paired and sometimes lumped with the power of True Names, words of power are common parts of a wizard's bag of tricks.

Words of Power may be a part of a Language of Magic but are distinct in several ways.

Other defining features: words of power tend to be comparatively short utterances — short phrases at most — that one can fire and forget rather quickly instead of a longer incantation. Offensive-leaning words frequently hit for massive damage and may be a justification for Calling Your Attacks and Invocation.

In a fairly frequent variation of this, the word itself is variable and the character themself has the ability to imbue it with power. Put enough will and maybe some Applied Phlebotinum behind carefully chosen words and you can potentially deliver spiritual hurting as well as physical. In some visual media this is sometimes displayed with a Sight Gag of the written word impacting the character.

A subtrope of Language Of Magic. Compare to I Know Your True Name (which was split from this). Contrast and compare Magical Incantation. Compare to Brown Note, which includes sounds, images and larger written works that have powerful negative effects on the audience. Contrast Make Me Wanna Shout, where it's the act of speaking that causes the damage, and the words shouted are secondary if they're even intelligible. See also Ritual Magic. Harsh Word Impact is a metafictional version. Also compare Speak of the Devil and The Scottish Trope. If the words themselves have no inherent power, but a character is still harmed by them, that's Verbal Weakness. If words provoke a fight by being hurtful in the ordinary way, that’s a Fisticuff-Provoking Comment. Works using this trope will often discuss The Power of Language.