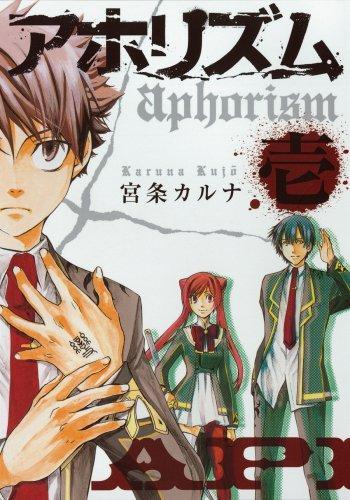 "From here on out, you will bet your life and fight."

Aphorism is a survival-horror manga by Kujou Karuna.

Welcome to Naraka High School, where every graduate is guaranteed a bright future. Graduates experience a huge improvement in social status and find that prestigious, coveted civil service jobs are within reach without ever needing to attend college. The only entry requirement: If you can see the floating island, you’re accepted.

Rokudou Momiji is a boy who does not matter, an absolute nobody. He has never been smart enough, or athletic enough, or even tall enough. High school means a fresh start, and he's already met a girl he wants to impress. So on the first day of school, when the students are tasked with writing down "a character (kanji) that they will need for the future", he writes "change".

And then everything goes to hell.

Monsters start oozing up from the ground, and the students are forced to fight for their lives. The characters they have chosen will be their weapons: Momiji's "change" allows him to transform his appearance at will, and in times of danger, become a tall, beautiful superhuman. Other students with characters like "katana" or "spear" can literally turn their characters into weapons.

When it's over, more than half the student population has been killed, and there's more: every time the floating island aligns with the sun, another "God's Blight"—the school's name for these incidents—will occur, and the students will once again have to fight for their survival. These incidents are literally as difficult to predict as the weather, and much like the students' new powers, the Blight will be based on a random kanji: maybe monsters once again, but anything from falling knives, balls of fire, or dancing pink elephants is possible. In the meantime nobody can leave the school grounds, although living is every student's choice in the end. Those who survive a year in this hellhole will be able to graduate and finally leave.

Rokudou is terrified, but he has to be strong, if only for the sake of Hirasawa Aira, his new best friend and the girl he wants to impress. Other characters include his smart-alecky roommate Hinata Sanjuro, knuckle-headed delinquent Takamada, tall, graceful Noa, and a pair of twins who are…just plain weird.

The Blight isn't the only thing these students have to worry about. There are people who will do anything to survive, while others are simply Ax-Crazy. To top it off, that mysterious being Rokudou can transform into? He’s connected to the history of the school, though no one is really sure just how.