A Pupil of Mine Until He Turned to Evil 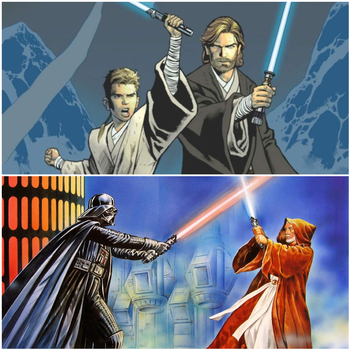 "Why do I get the feeling you're going to be the death of me?"
"A young Jedi named Darth Vader, who was a pupil of mine until he turned to evil, helped the Empire hunt down and destroy the Jedi Knights. He betrayed and murdered your father."
— Obi-Wan Kenobi, A New Hope
Advertisement:

A mentor once had a student, who used to be a good person, and perhaps the mentor's most promising and skilled student ever. That student had a flaw; a seed of villainy that needed a trigger. Usually, it was arrogance about his/her skills, or impatience at not being taught the final skills that the mentor had yet to teach. Then the student became a villain.

Sometimes the mentor is a Hero Protagonist and will have to take the student down in the story, resulting in an Older Hero vs. Younger Villain scenario. More often, the protagonist is another student the mentor takes on. If that's the case then the other student is the Mentor's New Hope and the former student is a Hero's Evil Predecessor. A long enough Master-Apprentice Chain might include a story of one of these as a precautionary tale.

Compare Deceptive Disciple (when the student was evil the whole time, just pretending not to be), Evil Former Friend, Fallen Hero, Merlin and Nimue, Used to Be a Sweet Kid, and The Paragon Always Rebels.

Contrast Treacherous Advisor, which is when the mentor betrays the student.

Not to be confused with Hellish Pupils. This is "pupil" as in a student, not part of an eye.

Do not put examples unless it was clearly stated the pupil was good beforehand. If it turns out the pupil wasn't, that's Deceptive Disciple.

Tigress tells Po the story of Tai Lung, about how Shifu found him as a cub, raised him like his own son, and then turned angry because Oogway saw darkness in him.

Alternative Title(s): Pupil Turned Evil, A Pupil Of Mine Until She Turned To Evil

Tigress tells Po the story of Tai Lung, about how Shifu found him as a cub, raised him like his own son, and then turned angry because Oogway saw darkness in him.