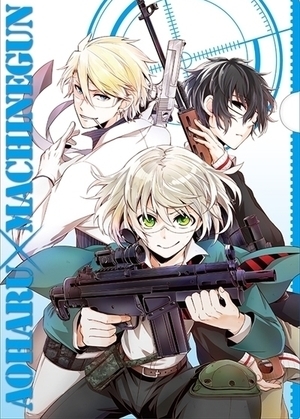 Aoharu × Machinegun ("Aoharu × Kikanjū" note It's not called "Youth × Machinegun" because "aoharu" is in katakana in the title furigana, which means "Seishun × Kikanjū" ("seishun" = "youth") would be incorrect) is a shonen manga by NAOE, with a pair of oneshots starting it off in Monthly G Fantasy in 2012; it then ran as an ongoing series from 2013 to 2019. Its official Japanese website is here

, but don't fret, it's also available in English courtesy of Yen Press.

The trio strive to be the best survival game group in Japan, of course!

Aoharu × Kikanjū got a Summer 2015 Anime by Brains Base, its official Japanese website can be found here

. It's streaming on Crunchyroll

note for the USA and Canada, HIDIVE

note also for the USA and Canada, and Anime Lab

note for Australia and New Zealand and covers the events of the manga up to Chapter 16.

Let's start this deathless death match, shall we tropers?