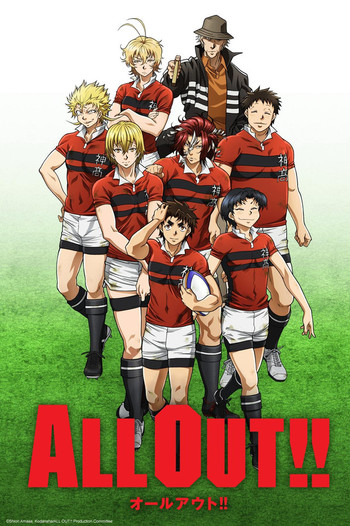 All Out!!, stylized as ALL OUT!!, is a japanese manga/anime series written by Shiori Amase. It began serialization in Kodansha's seinen magazine Monthly Morning Two in 2013, and ended with 17 volumes in 2020. The series got adapted into a 2-cour anime television series by Madhouse and TMS Entertainment that started airing in the Fall 2016 Anime season.
Advertisement:

In rugby, there's no ace striker, there's no number four batter… so who's the star of the team?

The story begins at school entrance ceremony of Kanagawa High School where Kenji Gion, a small but gutsy go-getter joins the rugby club. He joins with his classmate, Sumiaki Iwashimizu, who has a complicated past, and sub-captain Mutsumi Hachiouji, who always takes good care of his Club members. Lastly, there is Captain Takuya Sekizan, who has overwhelming powers but keeps his cards close to his chest. With such differences in both personality and physical performance, the team must learn to work and grow together so they can become the best.

The series adaptation is produced by Madhouse and TMS Entertainment, with Telecom Animation Film assisting with the production. The anime is directed by Kenichi Shimizu, and is available for streaming on Crunchyroll here

. The series is also available on Italian VVVVID. The manga is being released in digital format on Comixology here

Alternative Title(s): All Out