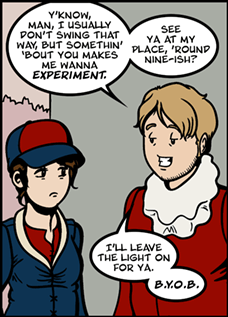 "That young man fills me with hope. And some other emotions that are weird and... deeply confusing."
— Zapp, Futurama
Advertisement:

No matter how flawless the Sweet Polly Oliver's disguise at fooling her male peers, there is some primordial part of a man's brain that sees through the disguise even though he consciously doesn't... and is also attracted to their new drinking buddy.

For the unwitting male admirer, this can be very confusing and distressing. Perhaps it must be Sweet Polly Oliver's suspiciously feminine features that turn him on the same way an attractive woman does, but he doesn't know why, and if they're not too bright might say, "Have I met you before?" (Which they have, only as a woman.) This is especially true for The Casanova, whose refined "babe-dar" can detect estrogen even when the eyes can't.

Expect the poor lech to have a lot of sexual confusion about his "feelings" for "another guy", and be incredibly relieved when she stops masquerading. Polly Oliver, if not oblivious to her effects, will (depending on the jerkiness of her admirer) feel guilty or gleeful. If she would normally pursue this guy romantically, she may reveal the ruse to mixed relief and feelings of betrayal.

It's rare for the man to actually be gay or bi in this situation and he will heave a huge sigh of relief upon learning that his love interest was actually a woman. He will likely take the opportunity to mention he is heterosexual today.

Compare Attractive Bent-Gender and Unsettling Gender-Reveal (for when finding out the love interest's actual gender makes them the wrong orientation). A subtrope of Gender Reveal. Compare If It's You, It's Okay and Closet Key if the person of their affections helped them discover their orientation and that first person may no longer care about the genders or the disguise, they just want the person they love. If the person crushes on said Polly Oliver whilst already taken, it may or may not result in a Bisexual Love Triangle.