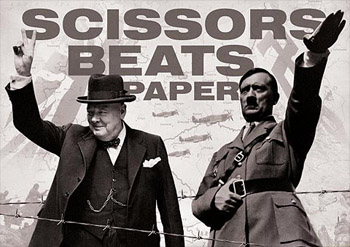 And that's how the Allies won.
"It's a very serious human game."
— Kurama, YuYu Hakusho
Advertisement:

Rock–paper–scissors is a game that is known throughout the world. Extremely simple, but elegant, there are three choices a player can make, and each beats another and loses to the third. If two choose the same, they tie. It's also a tie if there are more than three people who each lose and win at the same time. In the standard game, the advantages are explained as a rock (portrayed by a closed fist) smashing a pair of scissors (two separated fingers), scissors cutting a sheet of paper (an open hand with fingers together), and paper defeating rock by covering it up.

Many variations of the game exist, sometimes incorporating additional elements that may or may not be properly balanced against the usual three. For example, "Fire" may beat rock, paper, and scissors alike (but can only be played once) while "Water" beats "Fire" but loses to everything else (and can be played at any time). You can also modify the game by swapping in different gestures, such as the full-body "Bear, Hunter, Ninja."

("Bear eats Ninja.") There's also the somewhat memetic "Rock-Paper-Scissors-Lizard-Spock" which has expanded the game so each choice has two win conditions and two loss conditions note Spock smashes scissors and vaporizes rock, scissors cuts paper and decapitates lizard, paper covers rock and disproves Spock, rock crushes scissors and lizard, and lizard eats paper and poisons Spock. for those who want some balanced variety, and the truly insane "Rock-Gun-Lightning-Devil-Dragon-Water-Air-Paper-Sponge-Wolf-Tree-Human-Snake-Scissors-Fire" (each choice beats seven and loses to seven) for those with a Complexity Addiction. If you just have to take it too far, and aren't afraid of brain aneurysms, there is actually a version with 101 choices

Any way it's played, the simple and almost childlike qualities of the game make it a prime tool for a random Anti-Climax. Few things cause the tension to fall apart like the heroes suddenly deciding a tense issue by playing games.

The use of rock–paper–scissors to resolve disputes or apportion chores (rather than as a game) is mostly a Japanese Media Trope, but it has recently been commuting over to Western audiences as well, where it may be Played for Laughs. The game is also known, incidentally, as "jan-ken-pon" in Japan and South America, "kawi-bawi-bo" in Korea, "Rochambeau" in the West, "pierre-papier-ciseaux" or "chifoumi" in France, "tsu-ye-fah" in Russia, "chu-va-chee" in Ukraine and "Ching-Chang-Wallah" or "paper-scissors-stone" in parts of England and "scissor-paper-rock" in Australia.

Not to be confused with Tactical Rock–Paper–Scissors, which describe a similar "X beats Y beats Z beats X" situation. Neither it is to be confused with Elemental Rock–Paper–Scissors, which is about which Elemental Powers is best against which. Poor, Predictable Rock is when someone devotes themselves to one of the three options for any conceivable scenario. Scissors Cuts Rock is when a side on the losing end of a matchup manages to win despite its disadvantage. For a similar but simpler game for resolving disputes, try Heads or Tails?

When at an impasse in deciding to bring The Dark Queen along, the BattleToads settle on a game of "Toad-Sham-Bo" for a final vote.

When at an impasse in deciding to bring The Dark Queen along, the BattleToads settle on a game of "Toad-Sham-Bo" for a final vote.