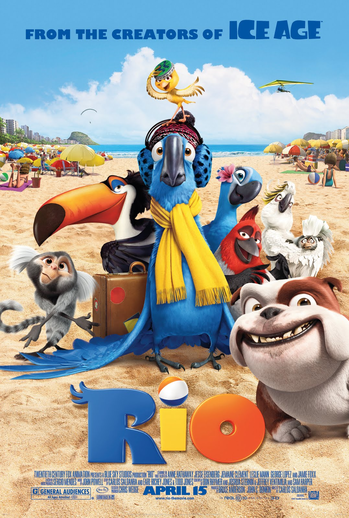 "1 out of every 8 Americans is afraid of flying.
Most of them don't have feathers."
"Flying is not what you think up here, it's what you feel in here."
— Rafael, teaching Blu how to fly
Advertisement:

Rio is Blue Sky Studios sixth film with Twentieth Century Fox, originating from director Carlos Saldanha's inspiration from his native upbringing in Brazil. Released on April 15th, 2011 in the U.S., and opened as the #1 movie in its first week.

Blu (Jesse Eisenberg) is a critically endangered Spix's Macaw (referred to as a "Blue Macaw") who never learned to fly, and lives as a pet with Linda Gunderson (Leslie Mann), owner of a small bookstore in wintry, serene Minnesota. However, after a visit from a ornithologist Tulio Monteiro (Rodrigo Santoro), Blu finds out that he is one of the last of his kind, and there is a female macaw named Jewel (Anne Hathaway) in South America. He is sent down as part of a captive breeding program, quickly kidnapped along with her by a group of smugglers, gets chained together with her, then they escape and go on an adventure in Rio de Janeiro. But as bad as the smugglers are—well, just the boss anyway—they are nothing compared to their nefarious cockatoo Nigel (Jemaine Clement), who is determined to find and recapture the two macaws and bring them back to the smugglers—and he'll do anything to accomplish his devious task.

Received a surprising single 2012 Academy Award nomination for Best Song ("Real in Rio"). A sequel, Rio 2, was released in 2014.

A spin-off series for Disney+, starring Nico the canary and Pedro the cardinal, has been announced to be in early development.

No relations to Rio -Rainbow Gate!- or the Duran Duran album