The Capital of Brazil Is Buenos Aires 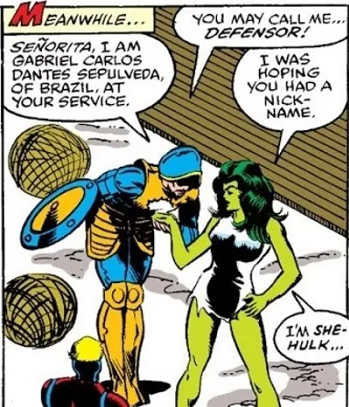 Some country somewhere in Latin Land; the spoken language is Spanish, like everywhere in Latin Land. It is composed of only one state (which is overrun by the Amazon forest) called São Paulo, whose capital is Rio de Janeiro, but it is also called Buenos Aires. Every Brazilian woman is stunningly beautiful, and has a beautiful bunda (that's Spanish for "ass", right?).note Not exactly. It indeed means ass, but in the Brazilian dialect of Portuguese, not Spanish. But hey, it's not like a whole continent would speak more than one language, riiiight...? By the way, whenever you're in a Brazilian city, it'll be a favela (what Brazilian people call shantytowns), which is a place that makes the industrial era slums look like bright Utopias; there are monkeys in the city streets, and large cats, and alligators ... and the occasional anaconda. The state has no military whatsoever, or schools; civilization is at a never-ending war against the natives. Finally, everyone is junkyard poor.

Whenever you see a Brazilian (or really, any South American) in fiction, expect him to look like a stereotypical Mexican or Latino. Also, whenever The Hero goes to Brazil for whatever reason it will be during Carnaval. Always.note Though, there are festivals all year round, for different things and in different places, in most Latin countries. Well, it would be easier to just make a list of what is wrong with Brazil in fiction:

Brazil, as with other Latin American countries, is a constant victim of research failure, as most people around the world (particularly from English-speaking countries) only know Brazil from tropes like this. For the record, the real capital of Brazil is Brasília, which is no hamlet itself at 2.5 million people. Rio used to be the capital up until April 21, 1960, when Brasília was founded by then-Brazilian President Juscelino Kubitschek

. It even is considered a World Heritage Site

by UNESCO (Buenos Aires is not in Brazil at all, but in neighboring Argentina). Brasília actually represents another similarity between Brazil and the United States: like Washington, D.C., it was a city built from the ground up to be the national capital, in a less than desirable physical environment (Washington, D.C. was built on a swamp, Brasília was built in the middle of the Cerrado, a savannah-like environment found mainly in Brazil's center and west).

Finally, it's probably useful to know that Brazil and Argentina (the country whose capital is actually Buenos Aires) have an old historical rivalry, even though nowadays it is mostly tongue-in-cheek and mainly reduced to sports.