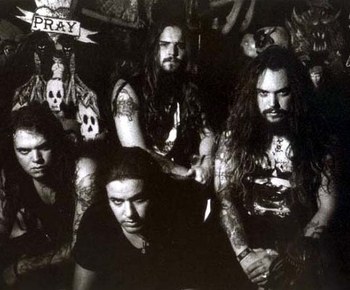 Sepultura note Portuguese for "grave" - the name comes from the Motörhead song "Dancing On Your Grave" are a Heavy Metal band from Belo Horizonte that's been kicking around since 1984 and is one of the few Brazilian acts that's even more popular to the north in the USA. They've been active in quite a few subgenres of metal but they're most famous as one of the most important Groove Metal bands.

The band was formed in 1984 by brothers Max and Igor Cavalera, who drew influences at first from popular eighties metal and rock bands like Iron Maiden, Motörhead, AC/DC, Judas Priest and Van Halen, but later on expanded into more extreme metal acts like Venom, Metallica, Exodus and Sodom. After some lineup difficulties, Sepultura obtained a record contract and released their debut Morbid Visions in 1986. At this stage, their sound was closer to Black Metal, with primitive riffs, raspy vocals, and lyrics about Satanism and the occult.

Lead guitarist Jairo Guedes lost interest in the band soon afterwards and quit, replaced by Andreas Kisser. Not only did this create Sepultura's "classic lineup", but it also changed their sound as Kisser brought in more influences apart from death metal. With Schizophrenia, the band switched to a hybrid of Thrash Metal and Death Metal that earned them critical acclaim. Also around this time they began making waves in the USA, moving to metal label Roadrunner Records and touring the hell out of Schizophrenia and Beneath the Remains.

Recorded in the USA, their 1991 album Arise increased their popularity and showed the band's first exploration of other genres while still keeping their thrash/death sound. The real change came with Chaos A.D. two years later. On Chaos, Sepultura ditched the thrash/death fusion and instead dove headfirst into Groove Metal, combining Igor's groove-laden rhythms with churning riffs and a genre stew that included Industrial Metal, Hardcore Punk and Brazilian percussion. Thanks to Andy Wallace's heavy production and several successful singles ("Refuse/Resist", "Territory", "Slave New World"), Chaos became the band's breakthrough album, earning both commercial and critical success. Their similarly-acclaimed followup Roots was yet another change in sound (Nu Metal this time) that also placed emphasis on Brazilian percussion (supplied by Carlinhos Brown) and featured a collaboration with members of the Brazilian Xavante Indian tribe, as well as appearances by Jonathan Davis, DJ Lethal, and Mike Patton.

Max Cavalera left the band shortly after the album's release in 1996, for still unclear reasons, and instead formed his own band, Soulfly. He was replaced by Derrick Green. The new Sepultura lineup predictably created some division, but the band carried on with modestly acclaimed albums. Igor himself left the band in 2006.

Max and Igor later got back together to form a new band named Cavalera Conspiracy which has caused a bicker as to which band is the real Sepultura, further confounded by the fact that Sepultura's music is almost unanimously agreed upon by fans to have improved in recent years.

Under a pale grey sky, We shall tropes: