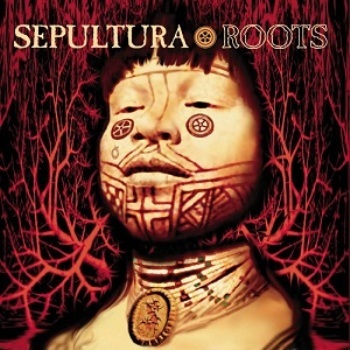 Roots is the sixth studio album by Sepultura, released in 1996. A New Sound Album in every sense of the word it featured the Heavy Metal band experimenting with Brazilian traditional music, featuring Carlinhos Brown, percussionist David Silveria, turntablist DJ Lethal and vocalists Jonathan Davis and Mike Patton. Apart from these traditional influences the album also dealt with Brazilian politics and culture. The album received excellent reviews, even from outside the metal fanbase. On the other hand, the album has been retroactively criticized by some people in the metal community for straying pretty far from the band's Death Metal roots along with its influence on the much maligned Nu Metal genre.

Roots would also be the last studio album released by the group with vocalist Max Cavalera. After this album he founded Soulfly and left the group.

Roots was released in February 1996, with a second double-disc album being brought out in November 1996, The Roots Of Sepultura, collecting a series of unreleased tracks, B-sides, alternate mixes and live recordings. This compilation album had a different series of tracks, yet the album cover looks almost exactly the same, save for a different background color. To add even more confusion, the 25th anniversary of the label Roadrunner series edition of Roots added even another different bonus disc.