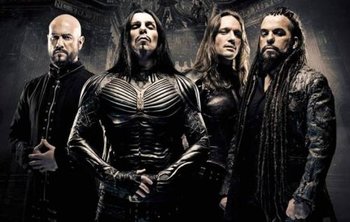 Septicflesh are a Greek Death Metal band that first formed in 1990. Originally a Death/Doom Metal act, they put out six albums before breaking up in 2003. The group reunited in 2007 and released Communion, a New Sound Album that combined their old sound with Symphonic Metal, the following year. In 2018, they signed with Nuclear Blast records, and released their first album with them, Modern Primitives, in 2022.