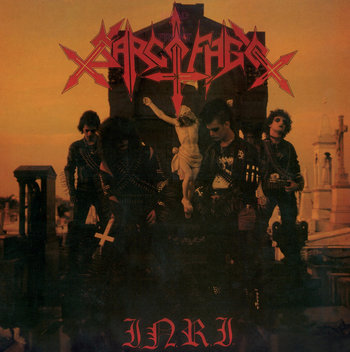 The band depicted on the cover of their debut album, I.N.R.I.
Advertisement:

Sarcófago was an extreme metal band from Brazil. Founded in 1985 by Wagner "Antichrist" Lamounier, previously from Sepultura, they were their contemporaries in forging the early Brazillian extreme metal scene.

Primarily, they were a major influence on Black Metal, due to their abrasive music, Satanic (though gramatically mangled) lyrics and Venom-inspired leather-and-spikes image. Their album I.N.R.I. is considered important to the genre's development.

The band split up in 1987 after recording I.N.R.I. and reformed in 1989. After that, their music veered more towards thrash-influenced Death Metal, and lyrics involved more reality-based topics, like alcoholism, prostitution and suicide. The Laws of Scourge is notably one of the earliest examples of Technical Death Metal.

From Hate onwards, the band opted for using a drum machine instead of a live drummer, which proved controversial. The members also cut their hair short in protest of long hair becoming popular due to the huge success of Grunge in the early 90s. Hate received mixed to positive reviews, and The Worst got lukewarm reception. After releasing the Crust EP in the year 2000, Sarcófago split up for the last time.

In celebration of the 20th anniversary of the Warfare Noise split album, some of the old members joined a tribute tour organized by Cogumelo Records. Wagner was absent because he didn't want to play professionally anymore. In 2009, rumors surfaced about a supposed comeback tour featuring the original I.N.R.I. lineup, but were ultimately proven false.