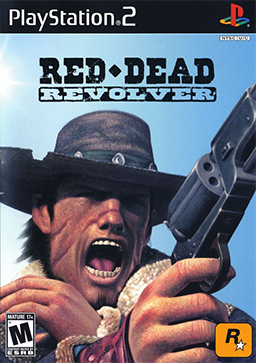 He's not very happy about his parents being killed. That's for sure.
Advertisement:

Red Dead Revolver is a third-person shooter from 2004, developed by Rockstar Games after sitting in Capcom's Development Hell for a while as a Gunsmoke Spiritual Successor.

You play as Red Harlow, who after being violently orphaned at a young age becomes a bounty hunter in classic Man With No Name tradition, hunting down colourful outlaws for whatever money he can get for them. A chance encounter puts him on the trail of the man behind the death of his parents, and the game climaxes in a huge battle to finally bring him to justice.

Sound vaguely familiar? That's because the game's an extended homage to the classic Spaghetti Western, as least as much as its predecessor Max Payne was to film noir. A lot of effort went into the atmosphere, including giving an oversaturated and 'grainy' cinematic quality to the visuals and building a fantastic score heavily influenced by (and almost indistiguishable from) Ennio Morricone's best.

Despite having very little hype and a disjointed production poking into the gameplay here and there, with its superb atmosphere, large and memorable cast and extremely fun multiplayer on its side Red Dead Revolver got good reviews and became something of a Cult Classic. In 2010, it was followed by the huge hit and critical darling Red Dead Redemption, which borrowed the game's Western setting but gave it a sandbox framework (well more of one anyway; Revolver's main town hub is explorable). It isn't a direct sequel, though the story of the game does get a mention and you can play as Revolver characters via DLC.