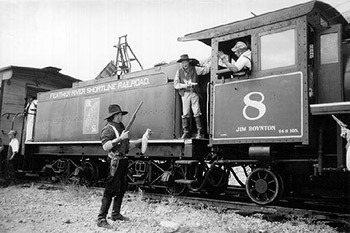 Doc Brown: Freeze!
Engineer: Is this a hold up?
Doc Brown: [Beat]... It's a science experiment!
— Back to the Future Part III
Advertisement:

A staple of The Western, an outlaw boards a train for the express purpose of robbing it. This was especially common during the period that payroll shipments were sent by train. If the railroad itself or the railroad industry in general is an antagonist in the movie, expect to see at least one of these.

A common Caper for films set in the right period. The earliest train robbery was probably the Great Gold Robbery of 1855 - the earliest one in the USA (outside the Civil War) occurred in 1866. So it's basically as old as railways themselves. May eventually lead to a Traintop Battle.

The video game equivalent is the Locomotive Level.

See also Armed Blag, which is a robbery of an armored car.