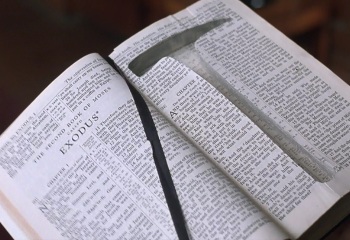 "Dear warden, you were right. Salvation lay within."
"Priests clutched onto Bibles
hollowed out to fit their rifles"
— Coldplay, "Violet Hill"
Advertisement:

Books are great. Even if you don't like reading, you can use a book for any of a number of handy purposes. One favorite trick is to hollow it out and hide something useful inside it.

Most often this is a gun. Often the book in question is the Good Book. It Gives A Whole New Meaning to "Guns and Bibles." Sometimes a character will go so far as to brandish the Bible while exclaiming "This will protect us!" or some similar line, only to open the Bible and reveal the weaponry within.

But the trick is flexible enough to be used for just about anything small enough to fit. Hand weapons, ammo, drugs, bottles of liquor, software, other books. Whatever.

If you're feeling clever, you can make sure that the object you are hiding goes into a hollow book of an appropriate genre or title: A secret locket in a romance novel, or a safe key hidden in a book on finance.

A book that is hollowed out and then glued into place on the shelf may be used to hide a secret switch (or the book itself may even BE the switch.) If you're lazy — or don't want to deface a book — you can just pull the book out a small way and stuff something behind it instead.

This trope can be Truth in Television; check That Other Wiki under "Concealing objects in a book

Not as she remembered it.

Alternative Title(s): Tome Is Where The Heat Is

Not as she remembered it.