Video Game / Through the Looking-Glass 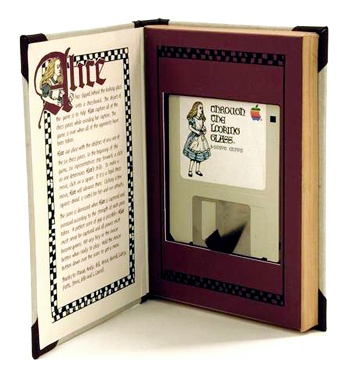 Apple spared no expense in packaging its first-party launch title. Then they delayed and buried its release, terrified that the Mac would be mistaken for a gaming console.
Advertisement:

Through the Looking Glass, also known as Alice and AliceX, is the earliest known game developed for the Macintosh computer. Inspired by the books of Lewis Carroll, it pits Alice against a full set of pieces in a fast-action Human Chess match.

Apple's Steve Capps created the game in 1982, when the Mac was still over a year from shipping. Despite interest from Trip Hawkins, who'd left the company to found Electronic Arts, Steve Jobs was determined that Apple publish it in-house. Jobs promised Capps a first-rate package design, which he got, and marketing to match, which he didn't. (Apple was fighting corporate perception that the whimsical Mac interface of a "mouse" that pointed at "icons" was a toy unfit for offices, and had withdrawn support from game developers—in this case, even itself.) Through the Looking Glass was released silently, some months after the computer made its debut.

The disk included two of Capps' other programs as B-Sides: a Maze Game called Amazing, and a Clock screensaver with morphing digits.

Tropes in Through the Looking Glass