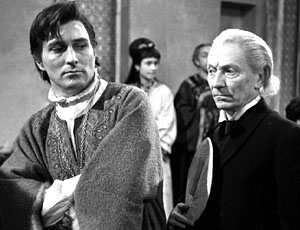 Polo sadly reacts to the news that his story was junked.note He should buck up, this isn't a rare occurrence in the Classic Era... and finding those missing episodes is a whole other story...
"I couldn't place it in the hanging-garden, could I?" What does he think it is? A potting-shed?
—The Doctor, mimicking Wang-Lo's comments about the TARDIS.
Advertisement:

The one where the Doctor does a full sci-fi free historical drama. Also the first proper "lost serial".

Written by John Lucarotti. This seven-episode serial first aired from February 22 to April 4, 1964.

A 7-part historical adventure, in which the Doctor and his companions join Marco Polo on his journey into Cathay. Polo sees the TARDIS arrive and believes it to be a magical box, so he decides to take it to Kublai Khan in Peking in order to win imperial favour. He's desperate to go back home to Venice, and hopes that the gift of what he believes to be a Buddist meditation device will convince Khan to finally let him go home.

The TARDIS still hasn't recovered from the previous adventure, and she's closed off much of her facilities (including the food and water machines) to repair herself. This proves to be a problem when Tegana, a villainous diplomat travelling with Marco, empties the caravan's water supplies.

The heroes find themselves forced to accompany Marco and his caravan on the long, long trek through the desert. Susan befriends a teenaged girl named Ping-Cho, Marco's ward, who's on a journey to go marry a wealthy 70-something man, entirely against her will. Ian and Barbara get along well enough with Marco, although Marco reluctantly acts as their jailer. The Doctor isn't in the mood to play nice, and simply tries to repair the TARDIS and sneak off.

After being introduced to Kublai Khan himself, the Doctor manages to befriend the old emperor and eventually foils Tegana's plot to overthrow him. In the confusion of the battle, the gang steals the TARDIS back — although the Khan notes that he would have been kind enough to give her back anyway. Marco gets to go home three years later, and Ping-Cho's fiance conveniently turned out to be Too Dumb to Live.

All seven episodes are missing, making it the earliest serial to have any missing episodes at all as the first three serials have survived. Several fan-made reconstructions, attempts to "recreate" missing episodes using telesnaps

and other sources of visual material along with the full existing soundtracks, have been made, including one in colour. The serial's audio has also been released on CD by the BBC, with linking narration by William Russell (Ian). An abridged, 30-minute reconstruction is also available on the DVD set "The Beginning", on "The Edge of Destruction"'s disc.

An official reconstruction of the missing Doctor Who serial Marco Polo, utilizing a fan-made audio recording, existing photos (tele-snaps and publicity stills) and a clip from the still-existing previous episode.

An official reconstruction of the missing Doctor Who serial Marco Polo, utilizing a fan-made audio recording, existing photos (tele-snaps and publicity stills) and a clip from the still-existing previous episode.