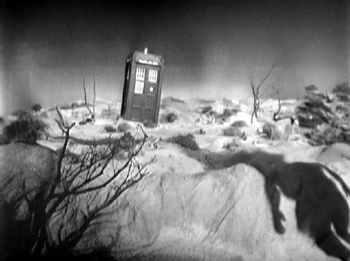 And thus, an over half-century SciFi dynasty is born...
"If you could touch the alien sand, and hear the cry of strange birds, and watch them wheel in another sky, would that satisfy you?"
— The Doctor, Part Two - "The Cave of Skulls"
Advertisement:

The one where it all began...

The very first serial of Doctor Who, written by Anthony Coburn. This four-episode serial first aired from November 23 to December 14, 1963.

We commence with the World's Trippiest Title Sequence and the first time an audience would hear the "Oooh-ee-oooh" of the theme tune. (Don't believe us? watch this

(with about two minutes worth of unused footage).)

Two teachers, Barbara Wright and Ian Chesterton, think their super-bright pupil, Susan Foreman, is a bit on the strange side. She's bored with regular physics and maths and wants to move on to multidimensional physics and maths, and she thinks that the UK has decimalised its currency, which hasn't yet happened in 1963: Britain would decimalise the pound in February 1971, after a few years of preparation.note At the time this serial aired, pretty much all of the rest of the Commonwealth had either already decimalised, like South Africa, or was in the process of doing so, like Australia and NZ. And for those who are confused, let's say UK/SA/AU currency back then was much more complicated. So, they decide to follow her home one night. This being 1963, it's benign concern for the welfare of a child, and not at all creepy.

They arrive at Susan's home address of 76 Totter's Lane. It's a junkyard. They hear Susan's voice coming from inside a police box. Thinking that her grandfather, "I. M. Foreman", has locked her in there, they proceed to open the door and enter a room bigger on the inside than out. This is Time And Relative Dimension In Space, or the TARDIS, a time machine and spaceship with the ability to disguise itself to match its surroundings. And her grandfather, a very crotchety old man, is the Doctor, who reveals the two of them are renegades who stole the TARDIS and left their planet in order to explore the universes temporal and physical.

Deciding that he can't have them tell the world about the Cool Ship and that the "Foremans" will need to leave the 1960's again, he starts up the TARDIS, acquiring the first two companions via abduction. Ian and Barbara are knocked unconscious by the TARDIS as it begins to time travel.

When they've landed again, the foursome step out of the TARDIS and Susan quickly exposits that it was supposed to have changed shape: the first clue that while it's more advanced than any Earth technology, it's still the equivalent of a used car. Before long, the Doctor is kidnapped by a tribe of cavemen when they see him smoking his pipe which he never smokes again. The one person in this tribe who knew how to make fire died, leaving the other cavemen there cold and helpless. The Doctor agrees to placate them by giving them fire, but unfortunately he has lost his matches. His three companions try to rescue him, but only succeed in getting themselves captured too. The tribe of primitive humans with monolithic names keep their captives in a cave full of skulls, skulls that have been obviously split open. Charming.

Za, a friendly (well, less hostile) tribesperson, unties them, and they make tracks. However, Za follows them into the jungle, still hoping to obtain the secret of fire from them, and gets mauled by a beast. Ian, Barbara, and Susan stop to tend to Za's wounds, but the Doctor decides to kill him instead, not wanting to be slowed down. This earns him his first ever What the Hell, Hero? from Ian, who prevents the murder. Eventually, the Doctor tricks Kal, the hostile aspiring caveman leader, into admitting he's a murderer, Ian gives Za the gift of fire, and they all escape back to the TARDIS. But since they had to take off in a hurry on account to avoid being speared, the Doctor was unable to make the calculations necessary to chart a course back to 1963. Hopefully their next landing spot will be a bit less eventful...

The moment that "Doctor Who" first reveals exactly what kind of series it's going to be (hint: it's not the kitchen sink drama about two teachers investigating an abusive grandparent you may have thought it was).

The moment that "Doctor Who" first reveals exactly what kind of series it's going to be (hint: it's not the kitchen sink drama about two teachers investigating an abusive grandparent you may have thought it was).