Recap / Doctor Who S4 E3 "The Power of the Daleks" 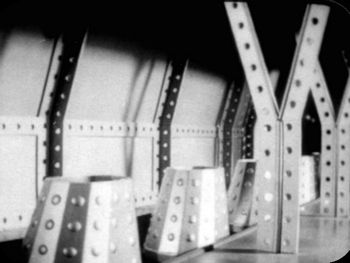 Headless Daleks? Clearly there's a rogue model running around, trying to be the only one...note And would ya guess what the title is of the next serial?
The Doctor: Life depends on change, and renewal.
Ben: Oh, that's it, you've been renewed, have you?
The Doctor: Renewed? Have I? That's it, I've been renewed. It's part of the TARDIS. Without it I couldn't survivenote the show would backpedal on that "part of the TARDIS" stuff repeatedly in the future.
Advertisement:

The one where the Doctor says hello again. The second Doctor. This was unexpected.

Arguably one of the most important Doctor Who stories ever madenote though the BBC didn't realize it until too late, The Power of the Daleks had to establish that a new actor could take over the lead role and play the Doctor completely differently, yet still remain true to the character.

Written by David Whitaker. This six-episode serial first aired from November 5 to December 10, 1966.

The Doctor has changed following the invasion of the Cybermen. Ben and Polly, confused by this, discuss what's happened. Ben does not believe this stranger could possibly be the Doctor, while Polly thinks it must be him, reasoning that they've seen many impossible things recently. It doesn't help when the man continues to refer to "The Doctor" in the third person.

The TARDIS lands on the planet Vulcan note no, not that Vulcan!, the site of a future Earth colony, and the Doctor goes out to explore with Ben and Polly following him. The Doctor has hardly set foot on the planet when he witnesses a murder and, on examining the body, discovers a pass proclaiming the dead man to be an Earth Examiner. Attacked from behind, then rescued by people from the colony, the Doctor decides to impersonate the dead Examiner and investigate. He discovers that there is a rebel movement bent on overthrowing the governor, but also that there is a far more dangerous problem in the form of a crashed space capsule containing inactive Daleks.

Despite the Doctor's warnings, the Daleks are activated and present themselves as willing servant robots, taking advantage of the colonists' trust to set up a reproduction plant. Meanwhile, internal power politics in the colony sees Security Chief Bragen secretly leading the rebels as a way of deposing Governor Hensell and seizing power for himself, while Deputy Governor Quinn has been locked up. Bragen believes the Daleks will help him and has rearmed them.

Of course it's only a matter of time before the Daleks are strong and numerous enough to emerge from their capsule and go on a killing spree. Many colonists are killed before the Doctor uses the colony's power supply to overload and destroy the Daleks.

Ben concedes that this probably is the Doctor after all, and the three depart for adventures new.

This story only survives in total in an audio format, thanks to fans at the time tape-recording it. There are a few short visual clips composed of extracts used in other programs and short clips made by pointing a camera at the television during transmission, as well as a partial trailer for the story. The few minutes of existing material can be found on the "Lost in Time" DVD set.

In September 2016, it was announced that the entire serial would be animated to the original soundtrack, thus marking the first animated reconstruction of a completely-missing serial (prior animations only focused on stories missing one or two episodes, and only covered the material not present in the BBC archives). The DVD was released November 21, 2016; the digital download was released November 5, 50 years to the day after it first aired. On Christmas Day, 2016, just before the new Christmas special, all six parts were on BBC America, in a colourised form. The colour version was exclusive to the Blu-Ray releases. Finally, in 2020, it got another release, with extensively revised animation and even more extras. The animated version of "The Power of the Daleks" would mark a change in approach to the BBC's animated reconstructions of Doctor Who, with future ones including more completely-missing stories and fully animated versions of ones that still had surviving episodes (largely to make them easier to broadcast and advertise).

See also "Victory of the Daleks", which has a similar plot.