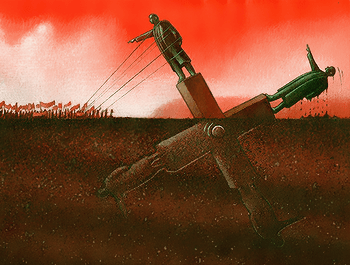 "France changes its government so often, it might as well install revolving doors in the Palace of Versailles."
— Old joke
Advertisement:

The reasons for this can be complex. Maybe the nation in question is extremely polarized in popular opinion? Maybe the successive governments aren't stable, or effective enough to last? Maybe the writers just think it makes for better drama (or better laughs, depending)?

These sorts of turnovers are particularly common in your stereotypical Banana Republic.

See also Full-Circle Revolution, where the new government is run by different people but policy-wise winds up being no different than the old. In a Revolving Door Revolution situation, successive governments may well be polar opposites (but see also The Horseshoe Effect).