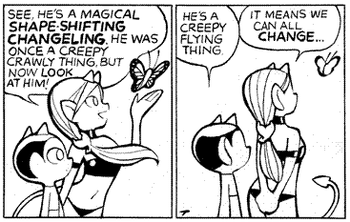 You'll be changing, too, Lil' E.
"If nothing ever changed, there would be no butterflies."
— Anonymous
Advertisement:

Sometimes butterflies are portents of total rebirth. Sometimes they are just pretty.

And sometimes their history of metamorphosis is used to show transformations less drastic than total rebirth. (Because butterflies are also ethereal and can fly, if this is a moral transformation, it is more likely to be a Heel–Face Turn than the other way around.)

Caterpillars can also work, and bonus points for the entire transformation in story. Moths can also be used, but then you don't get Pretty Butterflies, and besides, moths are nocturnal (fictionally, at least), and you know what that means.