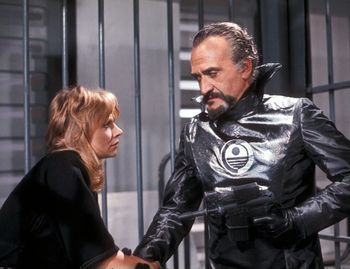 Roger Delgado's last outing as the Master is spent in Spandex. Credit where it's due - he makes it work.
In a reminiscent mood are you, Doctor? Poor Miss Grant, you have my deepest sympathies.
— The Master
Advertisement:

The one where Roger Delgado says goodbye, albeit unintentionally.

Written by Malcolm Hulke. This six-episode serial first aired from February 24 to March 31, 1973.

The TARDIS arrives in the year 2540 on board an Earth freighter which comes under attack. The crew seem to think that the Doctor and Jo, along with the other attackers, are Draconians - a reptilian race who are the major rivals to Earth's empire. The Doctor and Jo, however, can see that the attackers are really Ogrons - the ape-like heavies employed by the Daleks in "Day of the Daleks".

The Ogrons overwhelm the ship and steal the cargo, including the TARDIS. The Doctor and Jo are accused of being Draconian spies. The Doctor is sent to a penal colony, while Jo is placed in the care of "the Commissioner from Sirius 4" - actually the Master. The Master rescues the Doctor from the penal colony and imprisons him and Jo aboard his stolen spacecraft, revealing he plans to spark a war between Earth and Draconia using Ogron mercenaries and a hypnotic device that makes the spaceship crews perceive them as whatever they most fear.

However, the ship is intercepted by Draconians. The Master escapes with the aid of the Ogrons but one is left behind, enabling the Doctor to convince the Draconian Emperor of the Master's plans before being recaptured by Earth forces, while Jo is recaptured by the renegade Time Lord and taken to the Ogron planet, where the TARDIS has been taken. A Draconian prince who was with the Doctor reveals an Earth General was responsible for the previous war. Wanting to make amends, the General, the Prince, and the Doctor travel to the Ogron Planet and it is revealed that the real force behind the plot is not the Master, but the Daleks, who wish to conquer the Galaxy in the aftermath of the planned war.

The Doctor escapes and manages to get the Prince and General away before being injured in the confusion. Jo helps him to the TARDIS as he sends a telepathic message to the Time Lords. The Master's fate in this predicament, meanwhile, would remain unknown, and it'll be another four seasons to the story count until we see him again... and not exactly in the most ideal state of body or mind, either.

Advertisement:
This was, of course, never intended to the be the true finale to Delgado's Master. In fact, his actual swan song was supposed to come in the next season. The script, entitled "The Final Game", would've revealed that the Master is actually the Doctor's dark half split off into physical form (either that or his brother, depending on who you ask), and at the end the Master would've sacrificed his life to save the Doctor. These plans were derailed by Roger Delgado's untimely death in a car accident while filming for a role in Turkey, just several months after completing this story. His tragic death caused the Master as a character to be put on ice for almost four years, and Jon Pertwee cited it as one of the prevailing factors that led him to quit the series the following year. The "dark half of the Doctor" plot point would ultimately be repurposed for the Valeyard in "The Ultimate Foe", while the idea of the Master being the Doctor's sibling was ultimately voided by the Revival Series, where the Doctor openly dismisses the notion.

Incidentally, this is the time period that Bernice Summerfield, star of Doctor Who's longest-running Spinoff, comes from.